It’s been a beautifully synchronistic time this past couple of weeks. I love it when we encounter the signs that tell us we are on the right path, making a good decision, or simply confirm time and again that everything is connected.

At our Lammas gathering, our conversation turned to how a dear friend present grew up in Singapore… Which then led to me sharing about my late great aunt’s time as an army wife there in the 1950s. Turns out they were all living there at the exact same time and may even have known each other as the social circles they moved in were the same! We were dining right next to Aunt Norah’s mirror and dragons I inherited too, just to add even more synchronicity!

Last week our beloved old girl (our car) was diagnosed with all kinds of worn out bits (a bit like me!) so we had to accept that the huge repair cost just to get it to pass the MOT test would be better spent on something newer. So, I set about looking for a similar car, and the first one I found was an angelic white one. The plate began with RK, followed by the year Mr F and I got married! I did scan around for others but just kept getting pulled back to that one.

We arranged to see it immediately and as we stepped outside our front door, two white feathers perfectly arranged in a folded angel wing formation were on the ground. Then when we arrived at the dealership, I had another white feather at my feet as I walked away from our old car. I could feel my Dad’s presence and just knew we needed to look no further, and as we sat in the new car we just looked at each other and grinned, it felt like it had always been ours.

Then, this morning I pulled my daily random card from my mixed bowl of angel and tarot as usual, and the card that appeared: 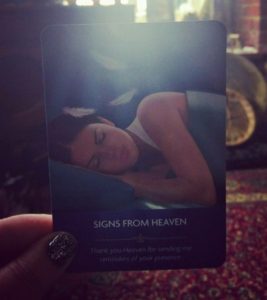