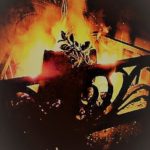 The root word for Yule came from Scandinavia and dates back to at least the 4th century when it was sacred to Odin, the “Yule Father”. Yule has always meant only one thing: the time of a festival at the Winter Solstice. To celebrate solstice was a celebration of the cycle of nature itself and a reaffirmation of the continuation of life. Many of the ancient traditions surrounding Yuletide are concerned with coping with the long hours of darkness and warding off evils, helping the return of light and warmth as the days grow longer in daylight to Spring.
If you feel like celebrating Yule in the old ways – here’s some helpful advice on what to bring into the home (many things will already be familiar!):

A special log was chosen on the eve of Yule, for the family home hearth fire. A small piece from last year’s log was used to light the fire. The lighting of the fire was a symbolic event, to hasten the return of the sun, mistakes and faults were forgiven and burned away in the fire so that everyone could begin a new year with a clean slate.

Charred pieces of wood from the fire would be kept as protection for the home throughout the coming year. The woods most often sought for the Yule log were birch, oak, willow or holly.

The roots of this tie in with the fertility aspects of mistletoe, and that it was viewed as a bringer of peace. Mistletoe is also a powerful healing herb. Mistletoe and kissing are also seen in one of the Norse myths: Frigga is the Norse Goddess of love, marriage and fertility. Her son, Balder was slain by Loki with an arrow made from mistletoe. When Balder was restored to life, Frigga blessed the mistletoe and gave a kiss to anyone who passed under it. Some later versions of this tradition say to remove one berry with each kiss. When there are no more berries on the sprig of mistletoe, no more kisses!

There is some debate on the origin of this tradition. Evergreen trees have been considered since ancient times as symbols of everlasting life, because they live through the winter unaffected by the cold. Evergreen branches as decorations symbolised the undying strength of the Sun. Decorating the trees may have come from the ancient Roman festival of Saturnalia (see below for more on Saturnalia). Evergreens were cherished at this time of year as a natural symbol of rebirth and life amid winter whiteness. But holly was particularly prized to decorate doors, windows and fireplaces because of its prickliness – believed to either ward off or capture evil spirits before they could enter and harm a household. Of course, there’s the tree.

By the 12th century, firs were being brought indoors during Christmas and being hung upside-down as a symbol of Christianity. The triangular shape represented the Father, Son and Holy Ghost. Hanging a tree from the ceiling was a means of letting people know that it had greater significance than mere decoration. According to Encyclopædia Britannica, “The use of evergreen trees, wreaths, and garlands to symbolize eternal life was a custom of the ancient Egyptians, Chinese, and Hebrews. Tree worship was common among the pagan Europeans and survived their conversion to Christianity in the Scandinavian customs of decorating the house and barn with evergreens at the New Year to scare away the devil and of setting up a tree for the birds during winter.”

Some attribute the giving of gifts at Christmas to the three wise men who brought gold, frankincense and myrrh to the newborn Jesus. But this tradition was common well before the time of Jesus, during Saturnalia. In Victorian times it was customary to give one gift rather than many.

The Ancient Roman Festival of Saturnalia

The name comes from the Roman God Saturn, who ruled over agriculture. He was the main God honoured at this time, after the late autumn crops had been sown. Saturnalia lasted for several days (typically 7) around the winter solstice. Saturnalia was the greatest festival of the Roman year, and was marked with great feasting, gift-giving, dancing, playing, and relaxing. Homes were decorated, work was suspended, and there was general merry-making and feasting.

The 12 Days of Christmas

And as for the concept of the 12 Days of Christmas… we can thank the ancient Egyptians! Four thousand years ago or so, ancient Egyptians celebrated the rebirth of the sun at this time of year. They set the length of the festival at 12 days, to reflect the 12 divisions in their sun calendar. They decorated with greenery, using palms with 12 shoots as a symbol of the completed year, since a palm was thought to put forth a shoot each month. In 567 AD, Christians adopted it. Church leaders proclaimed the 12 days from December 25 to Epiphany as a sacred season.

So as we can see, our modern Christmas is a real mix of traditions from many different cultures all over the world. However you choose to celebrate Yule, Christmas, Hanukkah… do it in style, and with joy and thanks to all that’s good.