Are orbs of light in photographs and video all spirit orbs? Or are they all just dust, moisture particles, fabric fibres, pet hair, camera flare from light sources at certain angles?

True spirit orb activity is rarely visible to the naked eye, but can be caught on digital cameras and infra red camcorders, CCTV and webcams min the right conditions. Having said that, I once captured orbs with an APS camera in a haunted theme park!

Orbs usually appear as spheres of light, they can appear as tiny flashing pinpoints of light sometimes. As orbs can and do move about in a random way it is easy to mistake dust particles or fibres as orbs.

How can we identify a real spirit orb?

Rational debunking first and foremost! Only then we look to paranormal cause.

Based on my own experiences in hundreds of venues and looking at thousands of photos  is my firm belief that where the likelihood of moisture and dust can be eliminated, the capturing of orbs in a photo or on a camcorder is a genuine sign of spirit energy being present at that time. For example, if there has just been some movement of fabric, people walking past the shot seconds before (especially in a dusty environment) small insects or pet hair present in the room chances are you are looking at something floating around close to the lens. So if you’ve eliminated the obvious physical causes, here’s what to look for in a true spirit orb.

Spirit orbs tend to have patterns within them and often have a nucleus of some kind. There may even seem to be faces within them but these aren’t the actual faces of the spirits present. We are programmed on an instinctive level as human beings to look for faces in random patterns. This is also known as pareidolia; “the imagined perception of a pattern or meaning where it does not actually exist, as in considering the moon to have human features.” Here’s a good example of a real orb caught on digital camera during a paranormal investigation of a verifiably active haunted pub: 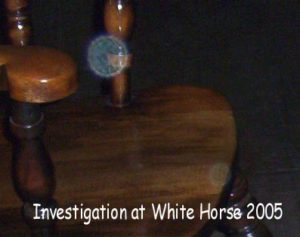 Orbs are sometimes accompanied by mists or smoky looking wisps as the physical spirit apparition or manifestation progresses. Often a mist will be caught on camera in the same shot as a spirit orb. These mists are different, as they can sometimes show the actual shape and form of the person manifesting. A great example of this:

A clear face of an elder in the mist in this picture taken in 2003 by a US resident in an area with lots of indigenous  history. He felt it was a benign and friendly family protector who wanted to be seen.

The Cause of True Spirit Orbs

Spirit Orbs and other light anomalies are just a reaction caused by the expenditure of energy when a spirit manifests. They are part of a physical reaction created as the manifestation occurs… think exhaust fumes. A vehicle produces exhaust as a byproduct of combustion. Orbs are just a tangible sign that a spirit is present.

Physicists tell us that action produces a reaction – hence when a spirit expends the energy required to manifest in our presence, the spirit lights we know as orbs are produced along with other phenomena.

It takes a tremendous amount of energy for a spirit to physically materialise here in our environment. Hence the orbs, mists, even localised cold or hot spots we’ve record on laser thermometers on investigations, sudden breezes, noises or lights that can be experienced. All effects from the same cause.

Everything living , dead or inanimate has a vibrational speed according to the basic laws of physics. (Science, yo…)

As a medium I’ve been shown time and again that when the body dies, the consciousness  lives on in another state. All memories of all lives lived before, personality traits, and intelligence are intact.  The Spirit World/ Place Between Lives/Heaven is in fact all around us occupying space at a different vibrational speed than physical matter here.

Your spirit is the very essence of life, and has no physical form, but can occupy physical form (occupying a body of flesh and bone). The spirit is perfectly capable of existence outside the physical vehicle that carries it around during a lifetime here. Hence, OOBE and NDE experiences often being reported when a person is revived. What makes us a conscious being, is far more than mere flesh and bone, and my belief in life after death is backed up by the scientific knowledge that energy does not cease to exist; it simply changes form. So that part of us which is consciousness changes form when the life supporting it ceases.

When mediums communicate with spirit, the spirit person often represents as they would be remembered here on the physical plane. This means that a medium can see and describe distinguishing features etc, a description of the personality and character, any illnesses or complaints they had, how they died, life experiences and so on.

However, since they no longer occupy the physical plane, spirit people are simply remembering what they looked like, and recreate it at will for whatever purpose.

Have you experienced unexplained phenomena or a haunting and want it explained and/or stopped?