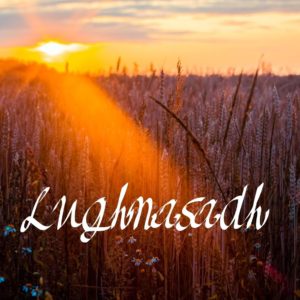 (For our friends in the Southern Hemisphere it is February 2nd )

Pronounced Lood-nah-sahd, the name originates from the Celtic Sun God, Lugh, who presided over the first grain harvest of the year. Also known as Lammas, from Old English terms for “loaf” and “mass,” although this is a Christianised name for an old Saxon fruit-and-grain festival designated by the early English church.

The holiday celebrated the ripening of apples and winter wheat which according to tradition, was made into loaves and blessed in the church. Lammas Day also was a day to settle accounts. In Scotland, tenant farmers took their first grain harvests to their landlords on August 1 to pay the rent, people traded and bartered.

It is one of the Celtic fire festivals, honouring the Celtic culture-bringer and Solar God Lugh (Lleu to the Welsh, Lugus to the Gauls). In Ireland, races and games were held in his name and that of his mother, Tailtiu (these may have been funeral games). The second aspect is Lammas, the Saxon Feast of Bread, at which the first of the grain harvest is consumed in ritual loaves. This time is also sacred to the Greek Goddess of the Moon and the Hunt, Artemis (Diana to the Romans).

As the days grow shorter and the nights longer after Summer Solstice, the Sun God gradually loses his strength. At Lughnasadh bread is baked from the first harvest of the grain in his honour. We work with the cycle that the Autumn Equinox is the Second Harvest of Fruit, and Samhain is the third and Final Harvest of Nuts and Berries.

The word Lughnasadh is derived from “to give in marriage” so matchmaking was a tradition for the day, alliances were often forged between clans and families in the form of marriage contracts.

Nine months away we celebrate the next Beltane, the birth of summer and life. According to ancient Celtic legend, the festival celebrates Lugh’s marriage to the goddess Eriu and honours his mother Tailtiu. Feasting, market fairs, games and bonfire celebrations were the order of the day. Circle dancing, reflecting the movement of the sun in sympathetic magic, was popular, as were all community gatherings. August was considered an auspicious month for handfastings and weddings.

First harvests are made, along with thanksgivings and rites to ensure the bounty of the crops for the coming year. To ensure this same purpose, some traditions observe, as a sacrifice, the death of the Sacred King. The Barley God, known from the folksong “John Barleycorn” is also celebrated at this time, with corn dollies in his image burned on a fire to bless harvested land for the next season’s crops to come.

At Lammas the Goddess is in Her aspect as Grain Mother, Harvest Mother, Harvest Queen, Earth Mother, Ceres and Demeter. Demeter, as Corn Mother, represents the ripe corn of this year’s harvest and Her daughter Kore/Persephone represents the grain – the seed which drops back deep into the dark earth, hidden throughout the winter, and re-appears in the spring as new growth. This is the deep core meaning of Lammas and comes in different guises. The fullness and fulfillment of the present harvest already holds at its very heart the seed of all future harvest. (It is a fact that a pregnant woman carrying her as yet unborn daughter is also already carrying the ovary containing all the eggs her daughter will ever release – she is already both mother, grandmother and beyond, embodying the great Mother.)

So as the grain harvest is gathered in, there is food to feed the community through the winter and within that harvest is the seed of next year’s rebirth, regeneration and harvest. The Grain Mother is ripe and full, heavily pregnant she carries the seed of the new year’s Sun God within her. There is tension here. For the Sun God, the God of the Harvest, the Green Man, or John Barleycorn, surrenders his life with the cutting of the corn.

The first sheaf would often be ceremonially cut at dawn, winnowed, ground and baked into the Harvest Bread which was then shared by the community in thanks. The first barley stalks would be made into the first beer of the season. The first sheaf guarantees the seed and thus continuity.

The last sheaf was also ceremonially cut, often made into a ‘corn dolly’, carried to the village with festivity and was central to the Harvest Supper. The corn dolly was made into a Corn Maiden (after a good harvest) or a cailleach, hag or crone (after a bad harvest). She could be dressed with ribbons, even clothed.

This last sheaf would live in the home, often above the fireplace or hearth of the home, until the next harvest. Or it might be placed in the branches of a tree or mixed with the seed for the next year’s sowing. In some way it eventually needed to return to the earth from whence it came so that the fertilizing spirit of John Barleycorn, of the Harvest God, could pass from harvest to harvest. It could be ploughed back, returned to decay and rot, or burnt and the ashes scattered.

In some parts of Europe the tradition was to weave the last sheaf into a large Corn Mother with a smaller ‘baby’ inside it, representing the harvest to come the following year. Once the harvest was completed, safely gathered in, the festivities would begin. Bread was made from the new grain and thanks given to the Sun’s life-giving energy reborn as life-giving bread.

Bring seasonal things into your home to decorate a special area or altar to give thanks to nature, eat seasonal foods.

Use all shades of green, plus every shade of sun and harvest, gold, yellow, orange.

Also known as Queen-Of-The-Meadow, Bridewort and Bride of the Meadow. One of the most sacred herbs to the Druids, this was often worn as a scented garland for these celebrations and was a traditional herb for wedding crowns and bouquets at this time of year. Also used for love spells and can be scattered to create peace.

Mint is another of the most revered herbs of the Druids for protection and healing, and at this time of year, a growing mint plant in the garden or home brings abundance and prosperity.

You could make corn dollies, or practice any weaving crafts. Grasses and reeds can be used if you don’t have access to wheat.

Gather seeds from plants that have finished flowering in the garden, involving young children is a lovely way to celebrate.

However you celebrate this time of early harvest and the abundance it brings us, have fun!